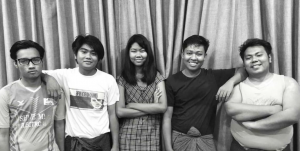 When we first saw the pictures from Burma, we realized these young people were about the same age as the ones who would have attended the school we were asked to help get built over a decade ago. They even offered to name the school after us, but that would be tasteless. A dose of corporate ego with a smattering of colonialism. No thanks. We prefer to do what’s right without doing a few victory laps to publicly laud ourselves.

Now seven of them, who are all members of the performance group Peacock Generation Thangyat Troup, have been locked away in the notoriously dreadful Insein Prison with no chance for bail, awaiting trial. Their crime? A satirical performance about Myanmar’s military, the Tatmadaw. “There are senior military officers who covet power and money,” said one of the lines.

They have been charged under Section 505(a) of Myanmar’s Penal Code, which criminalizes the circulation of statements, rumors, or reports with the intent to cause any military officer to disregard or fail in his duties. This is the same law Aung San Suu Kyi’s government has used against journalists and government critics in the past. These young people, like other artists daring to speak out, face a maximum sentence of years in prison, a fine, or both.

“All the forests and jewels are gone, all good things will be smuggled,” they chanted. A direct hit against Myanmar’s Army, who have long held near-total control over Burma’s gem trade and other natural resources.

Myanmar claims they are on the road to democracy. But acts like this, which are as common today as when the military formally ruled the country, show they are just as bad now as they ever have been. To make matters worse, “leaders” like Aung San Suu Kyi continue to remain silent as these attacks on basic freedoms unfold. Needless to say, Burma’s gemstone industry chugs along and their country’s precious gems once again appear in jewelry store showcases across the US and Europe. Ask most jewelers about concerns over Myanmar’s military’s role in Burma’s gem trade and most will say, “But they’re legal to sell now that the sanctions have ended!” And yes, a disproportionately large percentage of these Burma gemstones are in fact smuggled.

Just because something is “legal” doesn’t make it right.

If you want to help, there are two things you can do. For starters, through our friends at Burma Campaign UK you can take action to express your outrage at the arrest of these innocent performers expressing genuine concerns. Second, you can refuse to buy any and all Burmese gemstones or any other product tied to Myanmar’s military until genuine reforms, including free speech and free assembly, are allowed in that country.

Myanmar’s military contends these young people made them look bad. Our message to Senior Gen. Min Aung Hlaing is simple. You’ve made yourselves look bad all on your own.