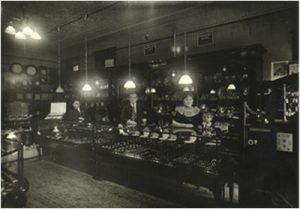 For many years we have stood up to dictatorships and oppressors throughout the world. From Angola to Zimbabwe, the Taliban to the Tatmadaw. For our work, we encountered obstacles and navigated threats to our personal safety, yet remained steadfast in the belief that wrongs need to be righted at any cost, lest we lose what we treasure most. But in over two decades of direct engagement we never once thought we’d be taking on a similar struggle here in our own country, the United States of America. Now we stand, a nation founded and built by immigrants, on the precipice of a cliff where the values we hold most dear and long considered vital to who we are as Americans, are threatened.

In 1910, the founder of our company, Franz Anton Lebr left his home in Baroun, Bohemia, bound for America in the steerage class of the SS George Washington. He apprenticed for a jewelry maker in Chicago and, in 1921, opened his own jewelry business that still continues today. This story is not unique for it has been repeated thousands of times, as each new generation of immigrants from Europe, the Americas, Asia, and Africa, representing countless religions and traditions, have added to the fiber that comprises these United States. That is, until this week, when President Trump, forbade entry to tens of thousands of individuals and families from Muslim-majority countries.

Simply put, to turn away an entire class of human beings, many of whom are refugees fleeing violence, is mean-spirited. It is unacceptable. It is irresponsible. It is also un-American.

At Leber Jeweler Inc, we stand firmly opposed to the travel ban, immigration and refugee freeze implemented by the President. We condemn his actions as harmful to both our country and to the world. We beseech all who are not citizens of the United States, especially those in and from the Muslim world, to know and understand President Trump does not speak for all Americans.

In the coming days, weeks, and months, we will continue our work on behalf of human rights and the environment, in defense of kindness and humanity, in a quest for a better country and world. We know this struggle is never ending, but it is the duty of every person and of every company to commit to this greater cause. We may not accomplish this immense task in our lifetime. But as long as we do not surrender, as long as we do not succumb to the darkness that is pervading the world, spread by those who thrive on hatred, distrust, and anger, we will not lose.