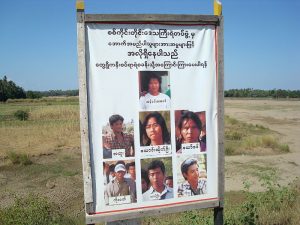 While the US has removed most sanctions against this SE Asian nation, the ban on the importation of Burmese ruby and jade remains. This, along with a prohibition on investment with the military in addition to targeted sanctions against a few specific individuals is the core of the punitive measures kept in place my the United States.

There’s no doubt business interests want to see sanctions lifted, despite the fact little has changed in Burma’s gem sector since the ban was first implemented in 2008. Of course, most “business interests” care naught for things like human rights. As long as there’s profit, they’ll turn a blind eye. So while entities like the United States Chamber of Commerce and the United States Council for International Business lobby for the ban to be removed, we, along with a number of human rights organizations, feel it is still necessary since it’s simply wrong to buy or sell any product that results in the suffering of people, animals or the planet. While we know this belief means we shouldn’t be expecting an invitation to join the US Chamber of Commerce any time soon, I’d much rather sleep at night with a good conscience.

Scot Marciel, the new US ambassador to Myanmar, said at his confirmation hearing in November 2015 that he would not recommend any dramatic change to the sanctions program. This is good news. However, if rumors we hear are true, Hillary Clinton is already laying the ground work to end the sanctions if she’s elected President, claiming it as her first foreign policy victory.

I recognize rumors are just that but, if it holds true and a candidate of either party has decided a year in advance that they’re willing to throw a human rights issue under the bus to claim “victory” in the foreign policy column, that’s just appalling.

Maybe that’s how politics is played in the US these days. If so, no wonder our country has become so divided and citizens so discouraged by many of our elected leaders. Let’s just hope the rumors are untrue or that someone with some sense sees that it’s unabashedly wrong.