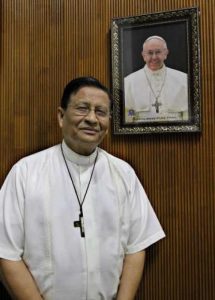 We first met Charles Maung Bo (or Father Charles as he likes to be called) many years back and we had a wonderful, conversation-filled dinner at a small Thai restaurant. When one pictures a Roman Catholic church official, one conjures up an image of formality. But Father Charles, who at the time was Burma’s first Archbishop, was anything but. He was funny. Interesting. And certainly full of stories of life behind the iron borders of Burma.

In February, Pope Francis promoted him to Cardinal. In his first Easter message Cardinal Maung Bo  spoke out against “international looters and cronies” who have long-exploited Burma’s finite natural resources.

“Evil does not give up easily…Ceasefire interludes are used by all armed people – state and non-state actors – to loot the resources of the people. The teak, timber and jade, and other treasures of the people, are open to merciless looting…Do not bury our people once again into poverty. Do not open their resources to the international looters and cronies.”

During the Vatican ceremony in which Father Charles became Burma’s first cardinal, Pope Francis whispered something in his ear that sounded, according to sources, like “go for it”. It was a special moment of empowerment that Father Charles says he won’t forget.

Neither will we forget individuals like Father Charles, who really is doing something to change the world for the better.