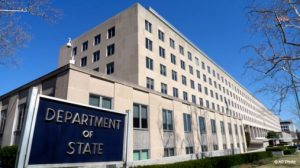 Burma is a country in flux. It’s making the first hesitant steps away from decades of brutal repression. Yet, despite the glimmering of hope, many problems still remain. Scores of political prisoners are still behind bars, the official government is primarily comprised of military and former military leaders, and human rights abuses continue in many quarters.

Presently, a violent conflict is raging in the northern Kachin state. Gem miners have been killed, young girls raped, and land seized, all part of a concerted effort by the military to gain control of the vast and valuable natural resources, including gems, that are found in this region. Dubbed the Jade War, it highlights the role Burma’s conflict gems play in fueling ongoing violence against the people of that country.

As the United States works to encourage Burma on a path toward democracy, the Obama administration announced yesterday:

In light of (the) positive changes, the United States is issuing a waiver and general license to ease the ban on imports into the United States of products from Burma. However, as concerns about some areas of trade with respect to Burma remain, this waiver and license do not affect the existing prohibitions and restrictions on the importation of jadeite and rubies mined or extracted from Burma, and on articles of jewelry containing them.

We are pleased the US government recognizes the role gemstones play in fueling conflict and violence in Burma and still strongly support the continued sanctions against these gems. By maintaining sanctions on jadeite and rubies from Burma, the United States has a lever by which to pressure for an end to the bloodshed tied to these precious gemstones.

When we first started working on efforts to implement these sanctions back in 2003, it was the first step on a long road. When I testified before Congress in support of the JADE Act in 2007, I knew we had a long way to go. But after all these years and much hard work, our mission remains. We will not rest until the gemstones of Burma truly benefit the people of Burma, and not just the ruling elite and their military protectors. Until that day comes, the gemstones of Burma will wait. They’ve been in the ground for millions of years. What’s a few years more?