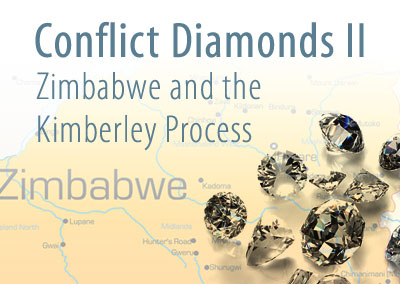 The Chiadzwa diamond fields in Marange, Zimbabwe may well be the most significant diamond discovery in several decades, certain to add to Zimbabwe’s total diamond output. Natural resources, including diamonds, are one of the Mugabe regime’s few remaining sources of capital. As a result, the Zimbabwean government has made a concerted effort to control all mineral assets in the country, both through “legitimate” (i.e. government controlled) and illicit channels.

The mad rush for diamonds has a high cost. Smuggling of conflict diamonds and other precious minerals out of Zimbabwe is rampant. In an effort to drive independent miners from the Chiadzwa diamond fields, the Zimbabwean military and police have killed hundreds of miners and injured scores more in a campaign described by Zimbabwe Lawyers for Human Rights as “resembling a war.”

In August, the current chair of the Kimberley Process, Namibian deputy mining minister Bernhard Esau, said that calls to suspend Zimbabwe from the Kimberley Process over human rights abuses “will not be taken seriously.” Unfortunately, he has lived up to his word. Russia and South Africa, diamond-exporting countries themselves, have defended Zimbabwe by blocking any efforts to formally sanction them within the Kimberley Process for their role in fueling the latest chapter in the conflict diamonds saga.

At Leber Jeweler Inc, we are outraged by the Kimberley Process governing body’s unwillingness to act in the face of blatant human rights violations by Zimbabwe. For many years, we have documented evidence of these abuses that result from conflict diamonds and have long sought Zimbabwe’s expulsion from the Kimberley Process-approved diamond trade.

We offer Canadian diamonds because this is the only way to assure country of origin on the diamonds we sell and to guarantee them as conflict-free diamonds. With any unknown origin diamond a consumer buys, they may very well be funding the violence that plagues Zimbabwe.

It is up to consumers to say “No” to Zimbabwean diamonds.