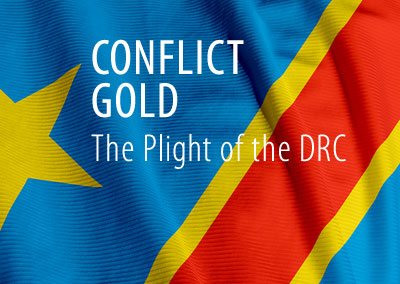 The Democratic Republic of Congo (DRC) is a nation struggling to emerge from a war that claimed over 5 million lives since 1998, with preventable disease and starvation aggravated by conflict being the leading killers. Despite holding democratic elections in 2006, violence still rages in the eastern part of this country. The continuing conflict has economic and political ramifications that extend worldwide.

While roots of this civil war run deep and wide, the fighting has been fueled in part by the country’s vast mineral wealth, with all sides—including armed rebel groups from Rwanda and Uganda as well as members of the DRC military—taking advantage of the anarchy to plunder natural resources for their own gain. Gold and diamonds are abundant in the DRC, as are minerals including columbite-tantalite (coltan), cassiterite (tin), and wolframite (tungsten). Tragically, these natural resources are being used to fund unspeakable human rights violations against the people of eastern Congo.

Militia groups extort or forcibly conscript impoverished civilians, including women and children, into laboring for them. Rape, extrajudicial killings and torture are all too common. The people of this troubled region have nowhere to turn and very few alternative means to support themselves. From the coltan in mobile phones to the tin in soda cans to the gold in wedding bands, we are all connected to the fate of the people of the eastern DRC.

For our part, Leber Jeweler offers recycled gold and platinum, assuring that the metals we use did not fund violence in the DRC or elsewhere. We maintain an active role in Washington DC, collaborating with lawmakers and government agencies to address the ongoing situation in this troubled region. We have partnered with organizations working in the DRC to offer financial and developmental assistance for people in the conflict zones.

This year, the Congo Conflict Minerals Act of 2009 (S. 891) was introduced in the US Senate, which directly addresses the continued violence related to mining in the DRC. Internationally, media are focusing increased attention to the war-torn region’s continuing problems. Yet, the violence hasn’t stopped. It will take a concerted international effort to bring the bloodshed to an end. But this is necessary if the people of the Democratic Republic of Congo are to have a safe and secure tomorrow.

As Ross Mountain, departing Deputy Special Representative of the UN Secretary General, said, “There is hope for the future, so that the country’s enormous resources and potential can be developed to benefit its citizens. Peace doesn’t fall from the sky, it’s a long and slow process and one must work hard for it.”Conflict Gold