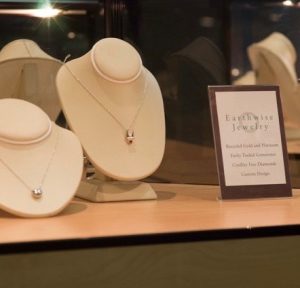 Ethical eco-friendly jewelry has been growing in popularity since we first launched the Earthwise Jewelry® collection back in the 1990s. Back then, the few small companies working in this field, while few and far between, were each genuinely committed in their own way to making the jewelry industry a better place. It was an uphill struggle. Considering the myriad issues, from conflict-diamonds in Sierra Leone, human rights abuses with ruby in Burma, and ecological devastation with gold mining throughout the globe, there was much work to do. While true ethical jewelry was the best tool to accomplish the task, sadly, much work still remains even today.

Too good to be true?

When we started Earthwise Jewelry® , I used to say we were a voice in the wilderness. The real pioneers with ethical eco-friendly jewelry were scarce. Illinois, Washington, Oregon, New Mexico, Texas. But then the silence became a din. “Ethical” became a marketing tool for many, and “eco-friendly” another form of greenwashing, devoid of any substantive meaning. Along with this, “conflict-free” became just another sales pitch to sell unknown, or worse, questionable origin diamonds from countries that are known human rights abusers. According to the Kimberley Process, a cut and polished diamond cannot be a “conflict diamond” (according to their legal definition) so words and claims about conflict-free started to become meaningless. Many jewelers, including many self-described eco-friendly jewelry companies, use this legal grey area as a defense to sell diamonds from wherever and whomever with no legitimate tracing of origin. But at Leber Jeweler, we’ve held our ground.

I actually cringe at the phrase “ethical jeweler.” My grandfather, who founded the company in 1921, was an ethical jeweler, even though he didn’t specifically sell “eco-friendly ethical jewelry.” He was honest. He treated people fairly and kindly. He cared about others, his community, and the world around him while doing his best to help one and all. I wish many of these self-described “ethical jewelry companies” out there today would have 1/10th his integrity, respect, and compassion for others.

As for us here at Leber Jeweler, are we an “ethical jeweler?” I much prefer being described as ethical people who happen to be jewelers. That means so much more.