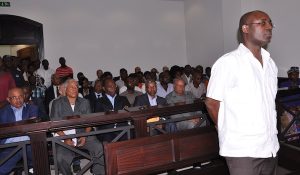 On March 18, 2015, our friend Rafael Marques de Morais accepted The Voice of Free Expression journalism award in London. Less than one week later, he faced trial in Angola for speaking the truth.

Rafael has long been the voice of artisanal miners in Angola who have suffered abuses, violence, and killings at the hands of Angola’s military and a private security firm hired by diamond mining interests. For his groundbreaking work, “Blood Diamonds: Torture and Corruption in Angola,” he is now being charged with libel against senior generals, all of whom are also shareholders in a diamond mining company.

When he spoke last week at the awards ceremony he said, “I believe in the power of solidarity. I have experienced troubles of my own. It has been the solidarity of others that has helped to strengthen my courage and resolve to continue my journey.”

Now is the time for all those who believe in the right to free speech and freedom of the press to use their voice in defense of Rafael.