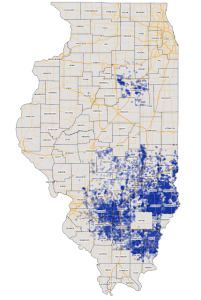 “Fracking is not a bridge to the future. It is a plank on which we walk blindfolded at the point of a sword. There is no right way to do it. And the pirates are not our friends.”  –Sandra Steingraber  the author of Living Downstream.

As with all bad or unpopular news, the Illinois Department of Natural Resources quietly released the rules that now allow energy companies to now begin applying for permits to drill for oil and gas using a controversial method called “fracking” that injects water, chemicals and sand at high pressure into shale rock.

Based on the rules, it looks like they were written by industry lobbyists. As highlighted by the Chicago Tribune:

-The law requires drillers who want to flare or burn excess gas to explain why it is “economically unfeasible” to capture the gas. Specific criteria for determining whether a company has proved economic unfeasibility have been eliminated in the final draft.

-Criteria for assessing whether a permit applicant’s water source management plan attempts to conserve water to the “maximum extent feasible” also have been eliminated from the regulations.

-A clause in the rules that gave IDNR authority to force drilling operations to move farther away than the law required in certain situations has been eliminated in the final rules. For instance, that authority might come into play near a playground or a school building.

-The final rules scale back regulation of radioactivity contamination. The issue was addressed at length in an earlier draft of the rules.

We stand with the people of Southern Illinois who are going to be most effected by this environmentally unsound drilling practice and who continue to resist this hostile takeover of our natural resources by Big Industry. For more information, go to Southern Illinoisans Against Fracturing Our Environment. The next community fracked may be yours.