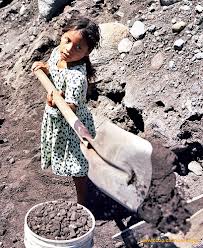 We’ve been working on this one for years. In India, it’s not uncommon for child labor to be used in both the mining and cutting of gemstones. While this fact has been recognized by the US Department of Labor’s Bureau of International Labor Affairs Office of Child Labor – Forced Labor, and Human Trafficking department, the Indian government has been slow to respond. In one instance, after we worked with the US government and submitted documentation showing the use of children in the cutting of gemstones, India’s official government response was that there was no child labor issue so they had no need to investigate and therefore had no interest in enforcing existing laws that were being broken.

So it was a big step forward when a new pending law was announced in India that would curb the rampant spread of child labor in that country. The Child & Adolescent Labor (Prohibition) Act, which has been approved by the Union Cabinet of India, will implement a ban on employing anyone below the age of 18 in hazardous occupations. While it will allow employing children between 14 and 18 in “non-hazardous” industries, employing a child below the age of 14 in any kind of occupation is set to become illegal, with fines up to Rs. 50,000 and a maximum of three years in prison.

Let’s hope this new law brings about the reforms existing child labor laws in India have not provided. While 13,60,117 inspections of reported child labor were carried out under the existing child labor laws since their inception in 1986, only 49,092 prosecutions were launched with a paltry 4,774 employers convicted. In most cases, a minor sum of Rs. 200 to 400 was imposed as penalty with several instances where the penalty was as low as Rs.20 to 25.

It’s a long road to eradicate child labor, not just in India, but throughout the world. But laws like the Child & Adolescent Labor (Prohibition) Act are a step in the right direction. We will keep watching.