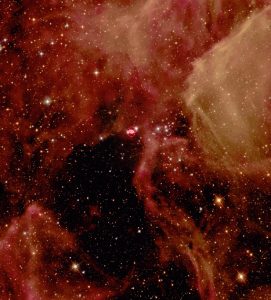 We’ve had several people ask where our gold comes from. Naturally, we use 100% recycled gold, but where does it come from at the very beginning?

The answer is straight up. (So to speak.) While every element that makes up our world came from space, gold is a little different. Unlike elements like carbon or iron, it cannot be created within a star as part of the body’s normal fusion process. Instead, it comes from something far more explosive.

Scientists discovered that during the merger of two neutron stars (the dead cores of stars that had supernovaed) a microsecond gamma ray burst was generated that ejected gold. Lots and lots of it. According to Edo Berger of the Harvard-Smithsonian Center for Astrophysics, “We estimate that the amount of gold produced and ejected during the merger of the two neutron stars may be as large as 10 moon masses – quite a lot of bling!”

Fortunately, this event occurred at a distance of 3.9 billion light-years from Earth, which is far enough that it should discourage all those big mining companies from trying to find a way to exploit one more resource!

At Leber Jeweler, we trace every product we sell back to the source. Even when it’s from the far reaches of the universe.