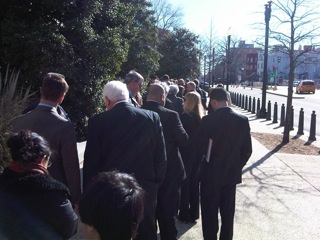 Lately, I’ve had a flurry of meetings in Washington, so lots of back-and-forth travel between Chicago and DC. The topics have covered the full spectrum, from human rights to worker rights, from the environment to economic issues happening here in America.

For this post, I had this beautiful shot of the Capitol dome gleaming in the sunlight backed by a stunning blue sky that I snapped racing from one side of the Hill to the other. But sifting through my Blackberry, I found an image of the line waiting to get in to one Senate office building that better captures the current dynamics in Washington DC at this moment.

Normally, one can breeze in to a Congressional office building three minutes before a meeting and still be on time. That usually means I can pack a schedule, knowing everything is timed to the minute and never be late for a meeting. But not this trip. Seems with the cut backs there’s less security to screen visitors. Or maybe someone is trying to send a message directly to Congress by making their hardworking staffers suffer in the cold? (Members of Congress have their own entry to the buildings, so no waiting in line.) One staffer told me he needs to arrive an hour early just to be on time.

With wait times to enter the government buildings running much longer than normal, one spends more time in line with suit-wearing, Blackberry-toting folks and less time advocating directly with the people I’m there to see. So even the face-to-face advocacy that makes up most of our trips to Washington DC has been cut back due to the sequestration. More time in line, one less meeting I can make on the Hill. The unintended consequences of mandatory budget cuts we all had hoped to avoid.